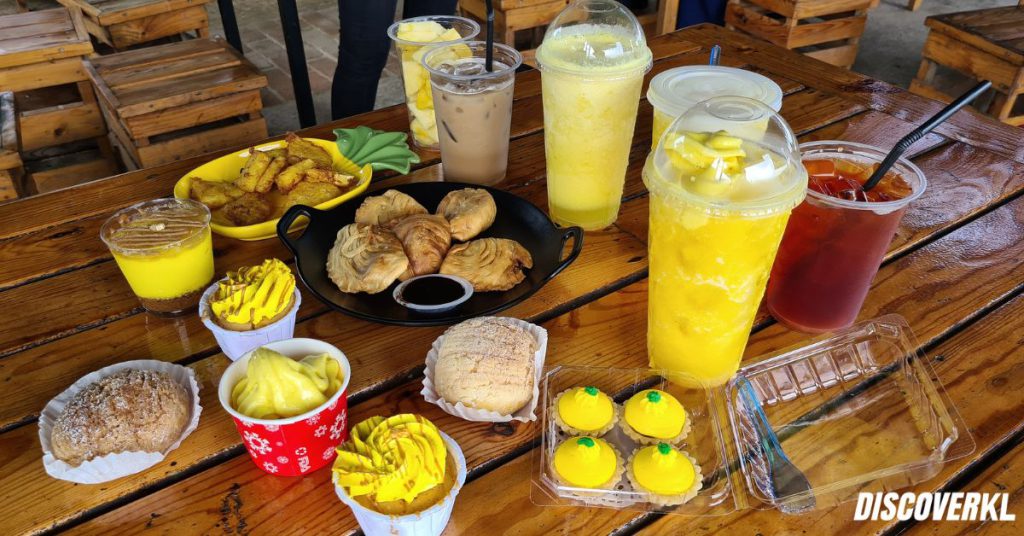 If you think there’s not much to do at a pineapple farm, Saudagar Nanas in Kajang would have you think again.

The road leading into the farm is unpaved dirt, and we have to admit our vehicles took a bit of a beating from the dusty rocky path on the way up (the farm is spread out across a sloping hill).

On our way up, we saw expensive vehicles making the same excruciating crawl up and down, and wondered, “Why would they do this to their cars? Is this trip really worth the potential scratches and dinks?”

Pineapples love warm, sunny weather, and the sun was absolutely blasting down our backs the day we visited.

A word of advice: even if you think you’re early (we arrived around 10.30AM), you might want to aim for earlier to beat the crowds and the heat.

Saying that this place is popular is quite the understatement.

People don’t necessarily come here to look at the rows upon rows of growing pineapples, as that sight gets old pretty quickly.

What they come here for is the good food, or so we’d heard, which boasts a mix of pineapple-based and regular local delights.

There are snacks, main meals, desserts, and drinks.

After taking pictures and videos of the pineapple plants, we lined up and placed our orders. It was quite an organised process, and they accept e-wallet payments too.

Since we came in a larger group, some of us secured seating while the rest waited to pick up our food, a strategy I’d recommend.

Desserts from the large fridges next to the counter are self-service, so you can grab them while queueing.

As we waited for our cooked food and drinks to arrive, we dug into an assortment of sweet treats, all pineapple-based, of course.

The Pineapple Cup Cake was topped with bright yellow cream and drizzled with a caramelised pineapple sauce, and underneath, the cupcake itself was moist.

The base was a pineapple jam spread which made it a little too sweet for us, but we have a feeling kids would have a blast with this one.

The Pineapple Japanese Creampuff toned down the sweetness, though it would’ve been nicer if the light and fluffy cream had a stronger pineapple flavour.

While the Pineapple Cheese Cake (Jar) served at Saudagar Nanas isn’t as rich as most cheesecakes, it’s still pretty creamy.

Instead of a genuine pineapple jam flavour though, I felt as though a pineapple extract had been used alongside sugar to sweeten the dessert.

We were down to our last sweet pastry with the Pineapple Cheese Tart (4 pieces) and these were actually my favourite dessert. Not too far off from the cheesecake, but more savoury, plus their bite-sized nature made them quite addictive.

The most attention-grabbing drink out of the bunch was the Kopi Nanas Ais, but it turned out to be quite weak and disappointing. Neither the coffee nor the pineapple was distinctive, though we’re glad we tried it for the novelty.

If you’re looking for refreshing pineapple drinks, you’re spoilt for choice here as they have the Pineapple MD2 Juice Cup, Pineapple Shake, and Pineapple Float to quench your thirst.

By this point, our taste buds were likely already pineapple-ised (I made that up) and we couldn’t taste many differences between those drinks, but they all got a thumbs up from the team.

We had originally wanted to try their Nasi Lemak Nanas Ayam Goreng Berempah (Basmathi) and Pineapple Fried Rice, but the former had already run out even before lunchtime, and the latter would only be served from 3PM onwards.

So, we proceeded with other interesting pineapple dishes which included the Set Karipap Nanas Daging/Ayam and Set Nanas Goreng.

The curry puffs were hands-down my favourite savoury dish there, with their deliciously crispy, fried-to-golden-perfection crusts.

They weren’t packed with filling either, which is actually my preference, but whatever filling was in there was fragrant and flavourful.

The meat was well-seasoned with a texture that complemented the flaky crust, and the pineapple was integrated seamlessly into the filling.

It provided an unmistakable sweetness to the curry puffs, enhancing their savouriness.

The Set Nanas Goreng were battered and fried pineapple chunks, and though you might think that pineapples have too much water content to fry well, Saudagar Nanas pulled it off.

The result was steaming hot, battered pineapple chunks that became even juicier and sweeter, their tartness cooked away.

There was a caramelised quality to each fritter too. As delicious as they were, we got a bit sick of their sweetness after a while, and struggled to finish a plate, even as a group of five.

In between the savoury bites of curry puff, we also tried the Pineapple MD2 Ice Cream Cup, which was unique.

Like some of the other desserts, this tasted like a pineapple extract and not a pineapple jam infused ice cream. Still sweet and delicious, but not very “natural” tasting.

If you want to finish off your meal with a dessert that’s authentic to Saudagar Nanas though, look nowhere further than their Pineapple MD2 Freshly Cut Fruits (Cup).

They’re as fresh as can be, cut up right behind the kitchen, and naturally sweet and juicy. It’s no surprise, since Saudagar Nanas specialises in the MD2 variety, said to be one of the world’s sweetest varieties of pineapple.

As delicious as they are, eating too much at a go will have you feeling the effects of the bromelain, so pace yourself.

Did you know: Bromelain dissolves the protective mucous coating your tongue and the roof of your mouth, allowing the pineapple’s acid to irritate them easier. You’ll feel this as a “burning” sensation, which leaves you feeling like someone sandpapered your mouth.

For souvenirs, you can take home whole MD2 pineapples harvested by the farm. They go for RM6 per kilogram.

You could also buy pineapple cuttings to try your hand at growing them, or just buy a decorative plant that’s from the same family as pineapples.

Those aside, we saw Sambal Nanas and Sos Cili Nanas being sold too.

When we were ready to leave by early afternoon, we were all feeling the pineapple overload, with some of my colleagues even swearing off pineapples for the next month or so.

My biggest takeaway is that, with the quality of pineapples Saudagar Nanas has, they should try and keep the natural pineapple sweetness in their desserts instead of adding processed sugar.

That would really give their desserts more of an edge and help them stand out, but I understand the need to cater to Malaysian sweet-toothed appetites. Plus, clearly, whatever they’re doing is already working to draw in huge crowds.

For an enjoyable trip to Saudagar Nanas, pack a hat and sunglasses, and don’t take your favourite car.