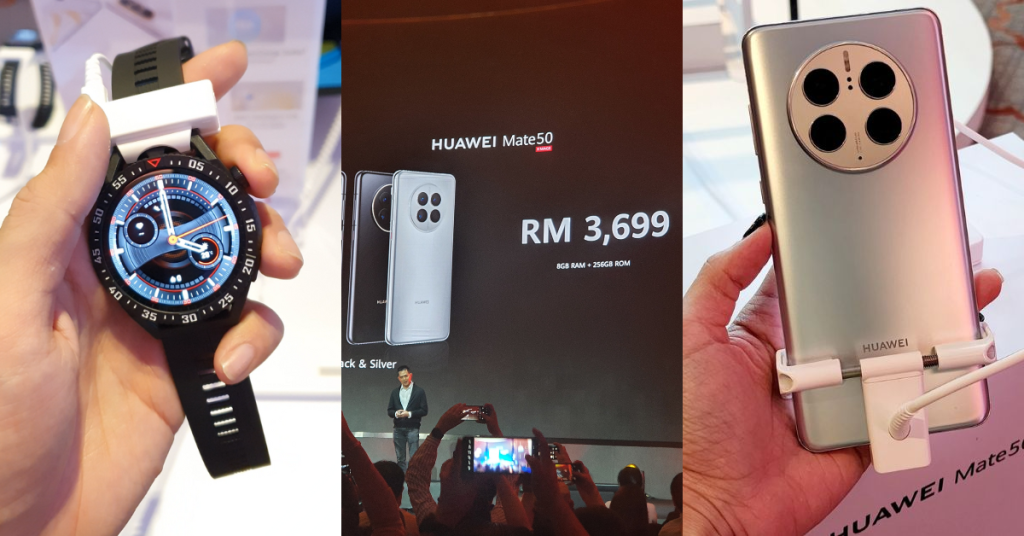 Unlike last year’s model, this is the first time Huawei is equipping their smartphones with their in-house developed Kunlun protective glass, and XMAGE technology.

According to Huawei, they claim that the Kunlun protective glass can withstand impacts and bending forces by up to 10 times more compared to ordinary glass. Suitable for those with butter fingers like myself.

As for Huawei’s XMAGE technology, it was developed after their partnership with Leica ended, in March 2022. It allows the phone to process images from the camera sensor, as well as control its combination of sophisticated optics.

Speaking of which, Huawei’s Mate50 Pro is equipped with a 50MP main camera with a variable aperture that can go from f/1.4 to f/4.0, a 13MP ultrawide angle camera, and a 64MP f/3.5 telephoto camera.

This combination of camera sensors makes it suitable for taking all kinds of photos ranging from portrait, landscape, and even macro photography. In fact, we were quite impressed to see that it’s able to capture the smallest of details, like various security features found on our Malaysian Ringgit.

At the front, you’ll find the ultrawide selfie camera alongside a Time-of-Flight (ToF) depth sensor. The ultrawide angle camera can help with fitting multiple people into the frame before resorting to using a selfie stick.

The Huawei Mate50, on the other hand, comes with the same 50MP main camera, but it has a 13MP f/2.2 ultrawide, and a 12MP f/3.4 telephoto camera instead. Another thing that’s lacking from the Pro variant is the ToF depth sensor, too.

But to be honest, in most situations, the difference between pictures taken with and without the depth sensor can be quite minimal.

Here are the specs for the Mate50 and Mate50 Pro:

If any of your friends or family members are in dire need of a phone charger, the Huawei Mate50 series is capable of 5W reverse wireless charging that’s compatible with all Qi charging compatible smartphones.

One thing to note is that the Huawei Mate50 series does not natively support Google Mobile Services and, by extension, the Google Play Store.

Having said that, some of your favourite apps may not be available on Huawei’s AppGallery.

Those who pre-ordered the Mate50 series by November 11, 2022, will be eligible for a bunch of free goodies from the Huawei Watch GT 2 Pro smartwatch, exclusive Huawei Mobile Services (HMS) rewards, as well as a 3-month free screen warranty.

Here are the specs for the nova 10 Series: