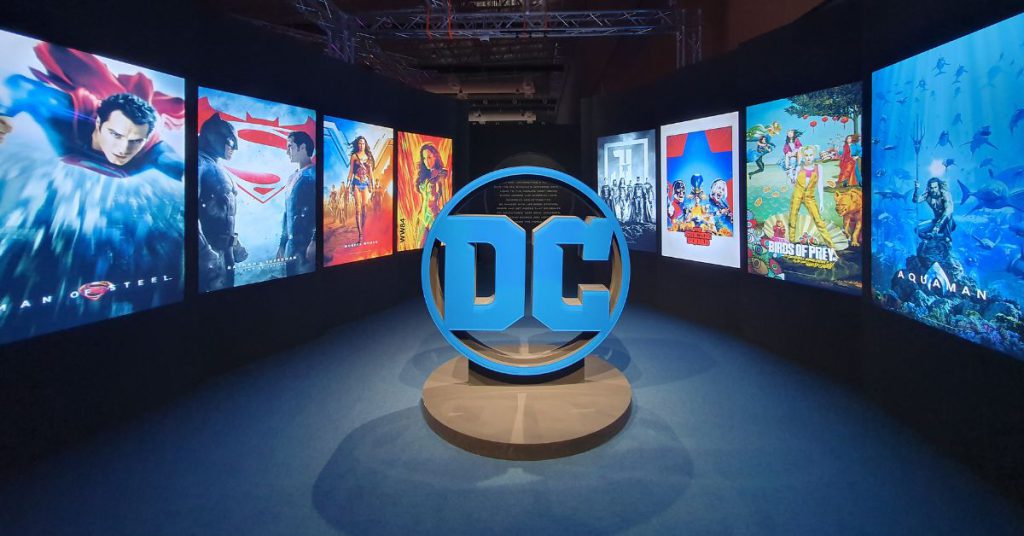 If you’re a big fan of superheroes from the DC Cinematic Universe like Superman, Batman, and Aquaman, The World of DC exhibition is currently ongoing at Tropicana Gardens Mall until April 1, 2023, where you can check these heroes out in person.

With ticket prices going at RM38 for children, RM55 for adults (RM65 for non-mykad holders), and RM150 for Express tickets, is the exhibition worth your time paying a visit to, and what can you expect from the slightly over 30,000 sq ft exhibition?

Here’s what we found during our visit there.

As soon as we entered the exhibition, we were greeted with a room with a large DC sign and a bunch of posters from movies like Man of Steel, Batman Vs Superman, Wonder Woman, Justice League, Suicide Squad, and Birds of Prey.

Moving deeper into the exhibition, you’ll enter the Superman-themed room filled with items found in various Superman movies and TV series, such as General Zod’s suit, kryptonite stone, and more.

If you look closely at Superman’s costume, you can see the amount of detail in the suit, from the stitching, down to the textures in the fabric.

Further down the room, you’ll find a large kryptonite spear on a shelf next to the ginormous Superman statue that looks to be much taller than 4 meters.

If you’re there with a big group, this is probably a good place to take a large group photo.

Next will be the Batman-themed room. The first thing that will most likely catch your attention is the huge Batmobile directly in the middle of the room, followed by prop weapons hanging on the wall.

Unlike some of the Batmobile props I’ve had the opportunity to see in person, the one in particular at The World of DC exhibition was not driveable nor functional.

There are Batsuits located at the corner of the rooms with a touchpad that illuminates the Batsuit so that you can have a clearer look at them.

Other than the Batmobile, there’s also the Knightwalker, a new vehicle that made its first appearance in the Justice League movie.

The Wonder Woman-themed room comes next, where not only will you find the Sword of Athena but also her iconic shield and eagle-like helmet on the shelf.

Looking closely at the Sword of Athena, you’ll see a bunch of symbols etched onto it. It was quite cool to see this level of detail on a prop.

This is also where you’ll find an interactive game where you roleplay as Wonder Woman, tasked with defeating your enemies using a variety of attacks and weapons.

After that, there’s the Aquaman-themed room. The one thing that stood out here was the interactive screen where many fishes, a stingray, and a shark will gather in front of you if you stand in a specific spot.

Next is the Birds of Prey and Suicide Squad-themed room, where you get to take pictures with Harley Quinn, and Joker. Here’s where you’ll also find the second interactive installation that lets you take a video of yourself conjuring up fire with your bare hands.

You can even save the video produced via a QR code that will appear on the screen on your phone.

There’s another installation deeper in that lets you colour the background of a popular Suicide Squad villain and download it as a form of memorabilia onto your phone.

Last but not least, we reached the final room of the exhibition, which is the Justice League-themed room, where you’ll find The Flash, Cyborg, Aquaman, Superman, Batman, and Wonder Woman.

Moving past the final room is where you’ll find yourself in the merchandise section. Here, you can purchase DC-themed goodies ranging from Funko Pop to model figures, with prices ranging anywhere from around RM20 to over RM12,000.

Overall, we’d say that The World of DC is definitely worth going to if you’re a big fan of the DC Cinematic Universe. The entire experience took slightly more than an hour including picture-taking and video recording.

The regular adult tickets were more than enough compared to getting Express tickets because fortunately there wasn’t a long line leading into the exhibition. We were however there on a Thursday night so weekends might be a different story!

The World of DC Exhibition