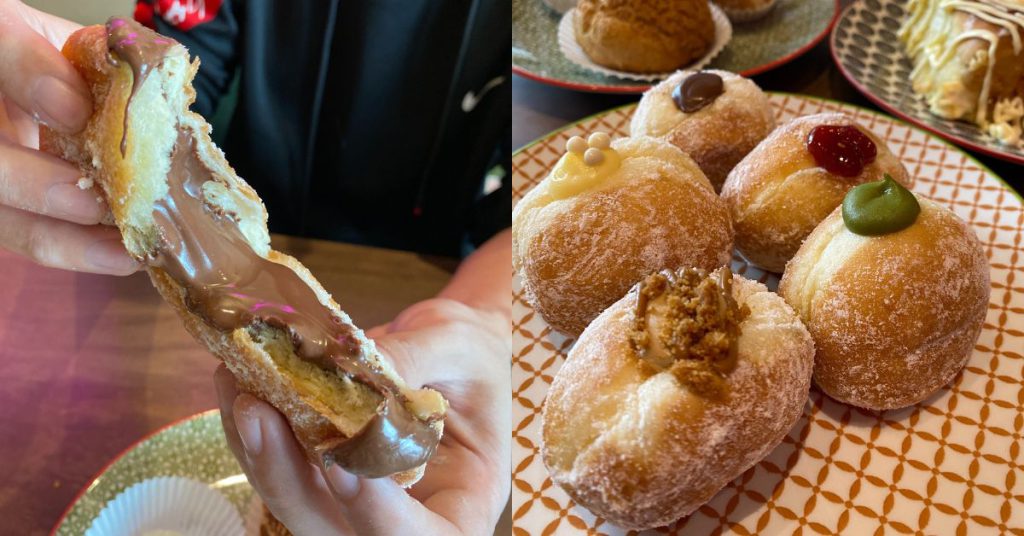 When our sister brand, Vulcan Post, covered Sugar and I a while back, we saw that their desserts and pastries looked quite appetising.

They’re best known for their bomboloni, an Italian-style filled doughnut that’s oftentimes consumed as a snack or a dessert. On top of that, they also offer other kinds of pastries ranging from Japanese cream puffs, cinnamon rolls, to an assortment of cookies.

Since their SS14 outlet is quite close to us, which is about a 10-minute drive away from our office in Taipan USJ, we set aside a bit of time one day to give them a visit and see what they have to offer.

Sugar & I has quite a few bomboloni flavours to choose from, with more being developed periodically. This is done by allowing employees to run their own R&D efforts to come up with new flavours that they think might attract customers.

In fact, they’ve even turned the entire process into a competition where they pit one bomboloni flavour against another, and by the process of elimination, determine which flavour comes out the winner. The employee with the winning flavour bags RM200.

Doing this not only benefits Sugar and I, but it also serves as a motivation for their employees to constantly come up with new flavours.

During our time there, Ilyas, one of the two founders of Sugar and I, hosted us and provided quite a few bomboloni and mini-bomboloni for us to try, which include flavours like Nutella, Lotus Biscoff, Homemade Mixed Berry Jam, Raspberry Cheese, and Niko Neko Matcha that are made fresh daily.

The mini-bomboloni are exactly the same, flavour-wise, as a bombolone, except they’re much smaller in size.

On top of that, they served us a couple of Japanese Cream Puffs, and a cinnamon roll. Here are our thoughts about all the desserts that we tried.

On another note, one thing that was immediately apparent upon having a bite is that Sugar and I is not stingy when it comes to their fillings. If I had to give a ratio of how much filling there is pastry, I’d say it’s about 50:50.

Onto the Nutella bombolone, Ilyas was proud to let us know that he used authentic Nutella spread instead of cheaper alternatives, and it shows because we were able to taste Nutella’s signature nuttiness and texture as we bit down into it.

As for the Raspberry Cheese and Homemade Mixed Berry Jam, we liked how fragrant they were, and the small chunks of berries were a nice surprise because they added a bit of excitement to the eating experience.

Before we moved on to the other food items, Ilyas brought out a new bomboloni flavour that he was experimenting with, a Homemade Kaya Butter-flavoured bombolone. The first thing that we noticed about this bombolone in particular was that it had a stick of butter protruding from it.

We were told that everything (except for the butter) was made inhouse from scratch, including the kaya.

As we took a bite, we noted that the kaya was definitely not something that tasted store-bought. The texture is also different, as it had a slightly powdery mouthfeel.

After we were done with the bomboloni, we tried out their Japanese Cream Puffs. We liked how crunchy and crackly the puffs were, and the sweet Chantilly cream kept oozing out with every bite.

Ilyas also brought us a Cinnamon roll, which tasted somewhat similar to those that you could get from Cinnabon, and it was large enough to share amongst two people.

All-in-all, if we had to pick which bomboloni flavour was our favourite, we would have to go for the Niko Neko Matcha, Nutella, and their new Homemade Kaya Butter flavoured bomboloni.

Other than the desserts mentioned above, Sugar and I also does wedding cakes and provides catering services.

Operating hours: 11AM to 7PM