It’s that time of the year again, and most of us look forward to the festive season with a combination of gastronomic anticipation and excitement. Whatever our backgrounds, Malaysians can usually agree on one thing—food unites everyone.

Celebrating the year-end festivities with a feast to match the occasion, Resorts World Genting invited the DiscoverKL team over to experience a taste of what will be available all through the Christmas and New Year celebrations.

We were treated to a combination of cuisines and drinks all through the day, all within the confines of the newly renovated Resorts World Genting. Thankfully, we managed to pace ourselves throughout the event, and got a taste of (almost) everything on offer. Burger & Lobster is originally from London, and its Malaysian branch at Genting offers up the same selection of its famed lobster rolls, burgers, and grilled lobsters. Having been to the original Burger & Lobster in London, I found that the food was more or less the same over at the local branch. The lobster was well-grilled but not overcooked, and paired well with the savoury buttercream sauce dripped over it. That said, we found that the size of the portions served were a tad small, enough for a small eater but not so much for someone with a larger appetite like myself and my colleague, Keith. Another of the usual favourites at the restaurant, the lobster roll, was served with a generous serving of shredded lobster meat sandwiched in a toasted bun. While decent, the taste of the lobster was somewhat drowned out by the accompanying sauce, so do keep that in mind if you order it.

Next on the menu, the other half of the restaurant name: burgers. 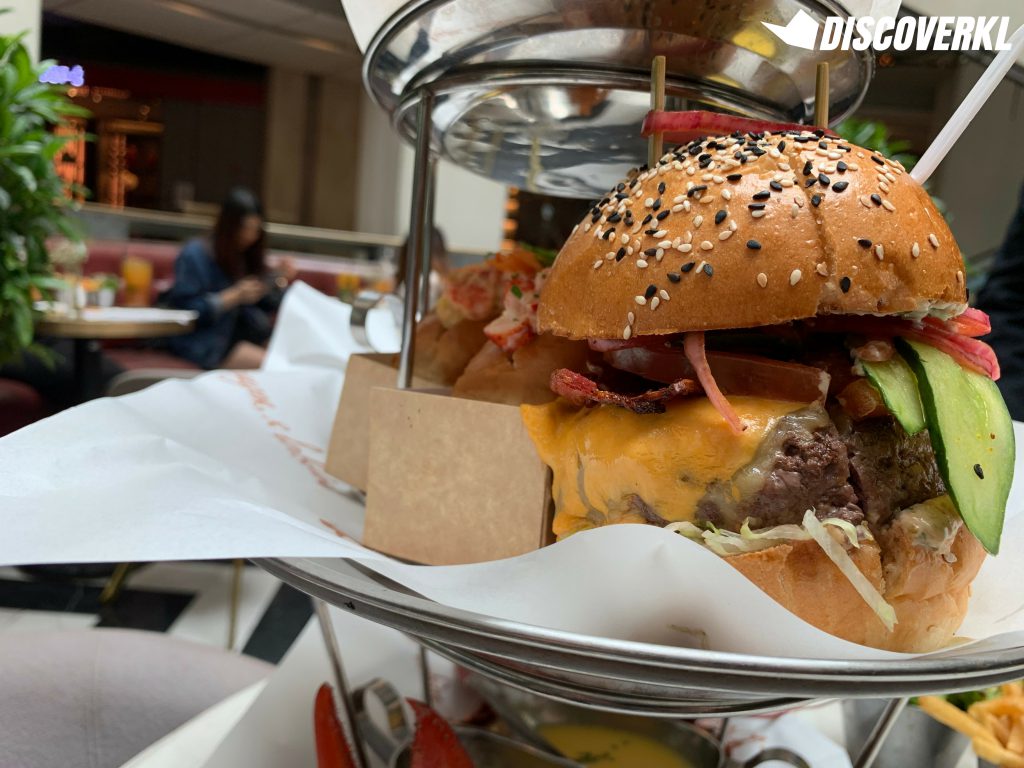 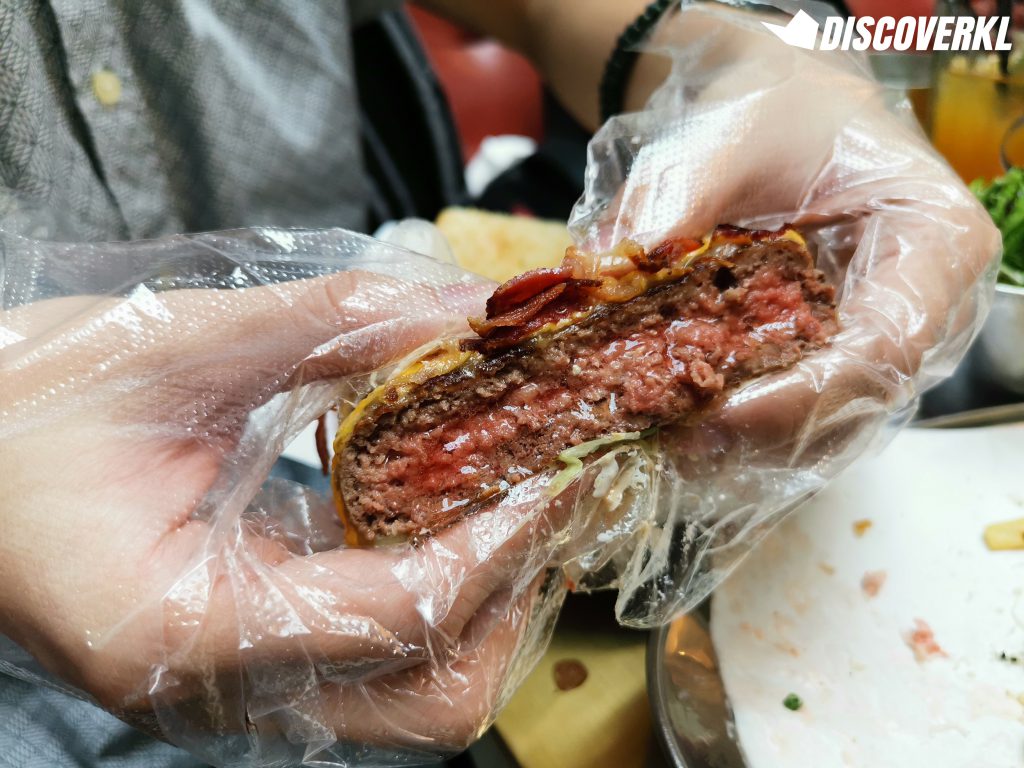 The beef burger, served with a choice of either charcoal or regular bread buns, was up to par—the patty was cooked to medium-rare perfection, and the meatiness of the burger was complemented well by the cheese and pickles. For the month of December, Burger & Lobster will be having their Christmas promotions—including the Tower of London package that comes with Moet and Chandon Champagne. For Christmas tea (and coffee), Cafés Richard serves their Le Festin high tea set—the pastries we tasted were moist without being too sweet. If you’re someone who enjoys the odd Instagram foodie shot, the selection available is definitely one to keep an eye on.

We also had a taste of the cream puffs, which had custard fillings that weren’t too sweet. The only complaint I had was that the puffs were slightly dry, although that could also be down to the fact that they were sitting on display for quite a while. No latte is complete without latte art, and Cafés Richard is no exception. Instagram foodies, be on alert! Until the 1st of January 2019, you can visit the Parisian-esque cafe for its Christmas High Tea set, which includes treats like pecan tarts, butterscotch eclairs, and creme brulee. Befitting the festivities, there will also be special Christmas drinks available. The Park Avenue Lounge is a large space in the middle of the resort, with an unobstructed view of cable cars rolling by and a large stage set for performances. While we were there, there was some renovation being completed outside the window, which did slightly affect the view, but I do expect the view to be pretty pleasing to the eye once construction outside has completed.

Having had my share of caffeine at Cafés Richard, I opted for a mojito. The traditional Cuban cocktail was refreshing, with the combination of sweetness, citrus, and mint finely complementing the rum. The lounge is complete with a full bar, where you can order cocktails, drinks, or a variety of caffeinated beverages. In tune with the festive celebrations, most of the desserts served were Christmas-themed. We didn’t have a chance to try every pastry available, but those that we managed to get a hand on were relatively sweet and just about moist enough.

You can join them for their Christmas Eve and New Year’s Eve countdowns with their canape and wine package (RM250-RM500) or for the special English high tea set on the 24th, 25th, and the 31st of December, as well as New Year’s day.

There will also be savoury treats available, with smoked salmon crostini, Christollen roast chicken, and honey glazed duck being just some of the options on the menu.

4. Fine Dining At The Olive Situated on the lobby floor of Genting Grand, dinner was served at The Olive. We had two choices of main courses; the Sous Vide Angus Tenderloin dish or the Roasted Turkey leg dish. The ambiance of the restaurant was tranquil, with light music and a simple white tablecloth setup setting the tone. A quick look around the restaurant revealed that the restaurant seems to have been patronised by several notable celebrities, including Jackie Cheung. Good company. The Sous Vide Angus Tenderloin served was cooked medium-rare, and was served with a simple side of roasted greens.

FYI: Sous Vide is a cooking method where the food is placed in a container and cooked in a water bath at a regulated temperature. This is to ensure that the food is cooked perfectly and evenly.

Personally, I found the beef to be salted well, without overpowering the taste of the tenderloin cut. However, Keith preferred his beef to be a little more cooked. Still, I’ve always found medium-rare to be the best way to enjoy a good steak. The other option we got to try off the Christmas menu was the Roasted Turkey Leg. The turkey was slightly overdone, although the poached prawn was tender without being overcooked.

Between the 2, I’d advise you to go for the Angus Beef, with the Sous Vide style of cooking as this ensures that the cut of beef would be cooked more evenly as opposed to a conventionally cooked steak. For dessert, we were served chocolate desserts. Known as pralines, the sweets are hard on the outside, and creamy with chocolate on the inside. They were a little difficult to bite through at first, but the chocolate inside was notably good in quality.

We were told by a representative of Resorts World Genting that The Olive is changing up this year—instead of the pre-set meals from last year, this year’s spread will be a (semi) buffet.

Included in their Christmas spread will be a selection of French cuisine. Fresh oysters and foie gras tarts make up the appetisers, while the New Year will see a spread of fresh seafood available. We’re also told that the New Year’s menu will contain a choice of either butter-poached monkfish or roast lamb shoulder. The Bakery at Genting Grand is selling whole-roasted turkeys to take-away for the Christmas celebrations. Weighing a hefty 4kg, a full bird costs RM288, and can be collected on Christmas eve or on Christmas day.

As you have to order in advance to get your hands on the traditional Christmas dish, remember to place your order between the 13th and the 23rd of December. Unfortunately, we didn’t have a chance to taste the roasted turkey, but from looks alone, the turkeys did look juicy—so much so that we were almost enticed to tear a chunk off the display turkey for a taste. After you’re done feasting, head over to Santorini Village.

Named after the beautiful Greek island of Santorini, the Santorini Village is a Christmas-themed village set inside SkyAvenue Mall. Despite its name, the Santorini Village was slightly underwhelming, with the section mostly filled with pop-up stores selling Christmas trinkets and confections.

The area is clearly designed with families in mind, with a selection of Christmas trees and ornaments sprinkled throughout the area. Most of the stores sell a similar selection of products, although there is a handy jewellery store if you have some cash to spare.

Worth A Trip Up The Highlands?

If you’re looking for a place to celebrate the season and don’t quite have somewhere in mind (the holiday season can be crazy in KL), the festive experience up at Resorts World Genting could be something for you.

Clearly tailored to suit every interest, they’ve redesigned the place to have a little something for everyone. Among the restaurants we visited, my personal favourite is the Park Hyde Lounge.

Then again, some of my colleagues preferred their lobsters while others voted for The Olive.

As I said, it’s a lineup of some variety, particularly with its Christmas theme. The only caveat I have to all this is that it’s all still pretty new, and in some areas, it shows.